Obsolete technology becomes an industry of the future 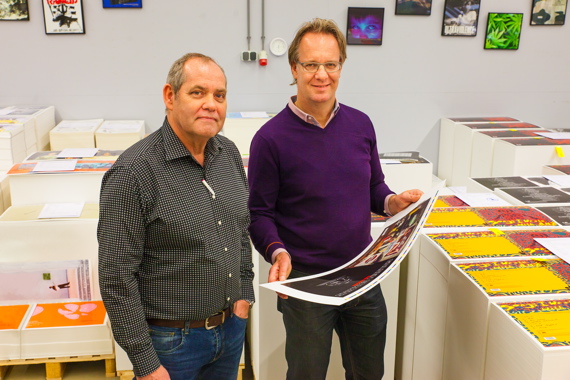 Ton Vermeulen (right) of Record Industry, and Wil Pfeiffer at StyleMathôt are in a winning industry—the production of vinyl records—something no one would have believed a mere decade ago. Vinyl sales in the U.S. alone increased by 260 percent from 2009 to 2014.

When Ton Vermeulen bought a pressing plant for vinyl records in Haarlem outside Amsterdam at the end of the 1990s neither he nor anyone else believed he was investing in tomorrow’s technology.

The seller, one of the big players in the global music market (Sony Music Entertainment), had watched sales gradually decline since the 1980s and then basically disappear as CDs took over.

Today the previously low-valued machines are working at full capacity and the company, now called Record Industry, has laid on an extra shift to meet demand.

As Vermeulen needed sleeves and labels for his records, he approached Wil Pfeiffer of StyleMathôt, a printer based on the same industrial area, to help him out.

A few years ago StyleMathôt moved into the same building so Record Industry is now a complete facility for the production of vinyl records, both LPs and singles. The vinyl pressing plant is led by Vermeulen and his partner Wil Pfeiffer, who is in charge of the printing presses that uses 70 percent of their capacity to print record covers, sleeves and labels. 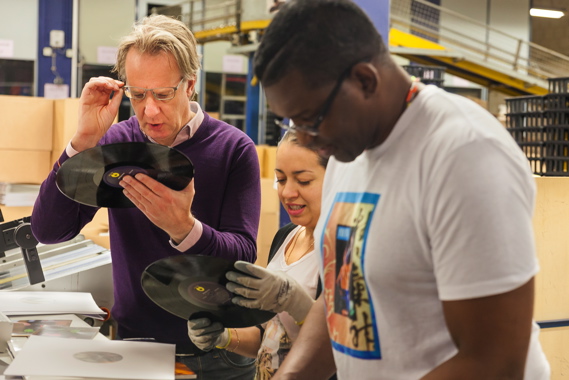 Ton Vermeulen and a couple of co-workers inspect the quality of a newly pressed record.

In the past few years they have seen a powerful upswing in the market. Between 2013 and 2014 alone, global sales of vinyl records rose from 6.1 million records to 9.2 million.

“Within a fairly short time period we’ve quadrupled our production, leading to extra high demands on efficiency and the smooth functioning of everything we do,” Pfeiffer says. “Since we switched to using Invercote from Iggesund for our record covers, we’ve been able to increase the productivity of our printing process by about 35 percent.”

He is careful to emphasize the importance of the cover’s quality, a view that is supported by Vermeulen’s analysis of the dramatic increase in vinyl record sales.

“The changeover from CDs to streamed music means that a large proportion of music consumers feel no need to own the music in physical form. Nor do I believe that the audiophiles’ view that vinyl records produce a better sound is very significant,” explains Vermeulen, who as a former DJ knows about music’s technical quality. “(However) I’m convinced there is a group of music lovers who want to own their music and the traditional LP format just feels right to them.”

Most of the records produced (on behalf of their customers) are reissues of classic albums by such big names as Elvis Presley, the Beatles, Jimi Hendrix and Miles Davis, though the company also offers and presses a lot of new releases like David Gilmore and Ed Sheeran.

The problem with reissues is that very often it can be difficult to find a good source to reprint the cover. The music might be well-preserved but the covers have not received the same degree of care. 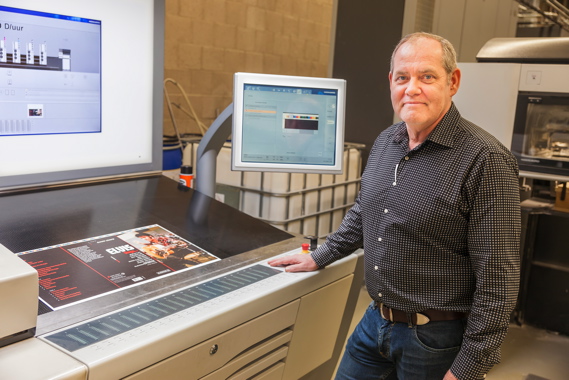 StyleMathôt’s Wil Pfeiffer and his printing press looks to do up 11-million record sleeves in 2016.

“Sometimes we have to use a worn cover with the price sticker still on it as the basis of our cover,” Pfeiffer says. “This then places heavy demands on our prepress department, which has to do a combination of restoration and hunting for material. The graphic quality of the cover is an important part of the whole experience.”

Together with Record Industry, StyleMathôt now has 150 employees and the record production of 2014 was 5.4 million, which increased to 7.5 million in 2015. The company is predicting yet another increase this year up to a total of 10-11 million albums produced.

But then perhaps the future can only be bright for a company whose visitors no sooner step into the reception area than they are welcomed by “I Heard It Through the Grapevine” with Marvin Gaye. Played on a traditional turntable, of course.

About Iggesund
Iggesund Paperboard is part of the Swedish forest industry group Holmen, one of the world’s 100 most sustainable companies listed on the United Nations Global Compact Index. Iggesund’s turnover is just over €500 million (~ CDN $733.2 million) and its flagship product Invercote is sold in more than 100 countries. The company has two brand families, Invercote and Incada, both positioned at the high end of their respective segments.
Iggesund was founded as an iron mill in 1685, but has been making paperboard for more than 50 years. The two mills, in northern Sweden and northern England employ 1,500 people. Company information available at www.iggesund.com.
Images courtesy of, and owned by Iggesund.

Caption 1, 2: Ton Vermeulen, Record Industry, and Wil Pfeiffer at StyleMathôt are in a winning industry – the production of vinyl records – something no one would have believed a mere decade ago. Vinyl sales in the US alone increased by 260 percent from 2009 to 2014. © Iggesund   Caption 3: Ton Vermeulen and a couple of co-workers inspect the quality of a newly pressed record. © Iggesund