The future of Festo on display at CMTS 2017 in Toronto

Festo offers up a wide range of exciting new products and technologies provoking both evolution and revolution towards Industry 4.0.

When Festo Inc. attends a trade show, one of the many things one can count on is it knows how to create a splash.

At the CMTS (Canadian Manufacturing Technology Show) 2017 trade show held September 25-28 at the Toronto International Centre, Festo not only discussed its plans for the not-quite-ready-for-prime-time promise of Industry 4.0, but offered a tangible new device and other products that keep Festo at the top of the production equipment game.

Oh, and there were mechatronic butterflies too.

Canadian Packaging magazine, along with many other of its sister Annex Publishing magazines, attended a media breakfast at the Festo booth on September 26, 2017.

Festo opened the event with a trio of very inventive industry videos featuring a mix of sci-fi, spy-thriller and even 1970’s Starsky and Hutch cop show acting, that highlighted the companies mantra of “evolution and revolution.”

Festo Inc. vice-president of finance Roy Pietila, explains that via Festo’s hybrid strategy, “Everything will be digitized, including the way we do business.”

According to Festo, users employ apps displayed on a PLC or personal computer (and soon on tablets and smartphones) to control a multitude of functions with the push of a button, without having to modify hardware.

The motion terminal eliminates the need for over 50 mechanical components on the machine that are part of running a typical pneumatic automation setup.

The VTEM combines new developments in low-energy piezo technology, control software and stroke and pressure sensors incorporated into the on-board valves to deliver a host of benefits: Increased productivity with the highest level of standardization, shorter cycle times, reduced energy consumption, less system downtime and lower maintenance and spare parts expense. Its self-regulating motion apps are constantly adjusting for factors like increasing wear of machine parts and can keep multiple actuators perfectly synchronized. It simplifies machine design and will allow machine builders to shorten the time to market for new products.

“The Festo Motion Terminal makes it possible to build flexibility and proportionality into what have been purely mechanical functions in pneumatics,” says Dr. Ansgar Kriwet, the Festo management board member in charge of global sales. “This flexibility already exists on the electrical drive side but wasn’t possible with pneumatics. If you had one valve with one function and you needed another function, you had to take a screw driver and change the valve. Now the VTEM will do it via an app. In essence, Festo has designed the flexibility of electronic circuitry into mechanical valves. One valve can now deliver all different valve functions plus fully proportional behavior and absolute reproducibility.”

The VTEM, which made its Canadian debut at this week’s Canadian Manufacturing Technology Show, is being launched with 10 apps. More are in development. Some of the available apps include:

Each VTEM is comprised of a Festo CPX control module, a VTEM controller – the brain assigning the software to the valve – an Ethernet WebConfig interface to configure the unit from a PLC, intelligent, app-controlled valves with integrated stroke and pressure sensors, as well as an input module for direct control of applications like Soft Stop.

The Festo Motion Terminal makes pneumatic energy competitive with electrical solutions in many applications where it wasn’t before. It provides a degree of accuracy and consistency typical of electrical drives and controls.

“Festo believes there is a world between electrical automation and traditional pneumatics,” says Dr. Kriwet. “It’s something customers want. The Festo Motion Terminal offers advantages from both worlds, and narrows the gap between the two.” 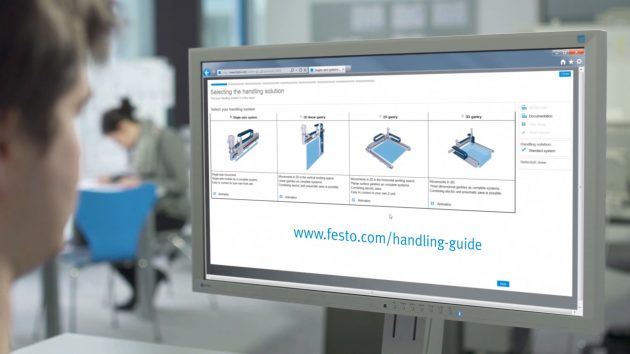 The Handling Guide Online is described by Festo as a game-changing innovation in online procurement, allowing engineers to design the ideal, ready-to-install handling system for their application in just minutes.

Now, Festo is making the process of getting that gantry up and running via a PLC just as simple by adding the new, optional Festo Motion Control Package. For customers, this dynamic combination produces a complete, optimized package of gantry, motor(s), controller, accessories and time-saving integration software.

With the Motion Control Package, installers don’t have to know anything about Festo’s software or write any code. This unique function block, created by Festo in Canada, is pre-configured for each end user’s job requirements so operators can initiate production changeovers – like changing load sizes, speed or number of cycles for the gantry – from their PLC user interface in the usual way.

As an innovator and trendsetter in fieldbus technology, Festo will make a major contribution to reshaping the future with new concepts for Industry 4.0. This includes new products, cloud services, apps, as well as a new online shop with comprehensive, integrated engineering concepts. This will ensure that, in the medium term, data will be available seamlessly and globally on all user devices.

Festo plays an active role in all relevant standardization bodies for Industry 4.0 and advises the German federal government on the “Industry 4.0 platform” initiative. Universal, open standard architectures provide significantly more benefits than closed concepts for small and medium-sized machine and system manufacturers, as well as for end users.

Industry 4.0 relies on fully networked, adaptive production through intelligent products with “embedded functions”—the cyber-physical systems. Many Festo components already meet the hardware and software requirements. Festo’s newest production plants, such as the Scharnhausen Technology Plant, both produce and use these products, thus paving the way for Industry 4.0.

Festo is working on making Industry 4.0 more of an every-day reality. 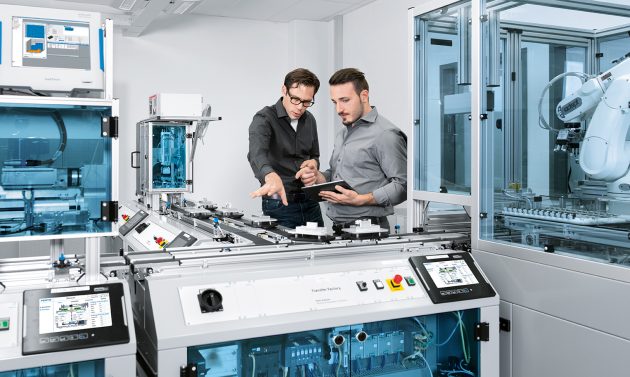 Known as Festo Didactic, the human training element of Festo was also on display at the trade show.

For over 40 years, Festo Didactic has been preparing students in North America for in-demand jobs in a complex industrial environment and provides colleges and universities with top-of-the-line equipment and training to develop the AM workforce of tomorrow. Festo Didactic achieves this by putting simulated Smart Factories into high school and college classrooms (EcoTech Institute, Clark University, Eastern Washington University, Great Basin College, College of Southern Nevada, etc., with one set to be installed in the Spring of 2018 at Toronto’s Humber College).

Festo is one of the first automation companies to foster collaboration with North American institutions for Industry 4.0 career readiness, and they have the competitive advantage to do so since acquiring LabVolt in 2014.

The company’s educational offerings also include training and consulting, eLearning and courseware solutions, and LMS integration. with its students receiving hands-on learning on the highest quality equipment aligned with Industry 4.0 standards — the same equipment they’ll work on when they graduate. As a result, students graduate with the skills and confidence they need to work in Advanced Manufacturing, and the factory of the future. 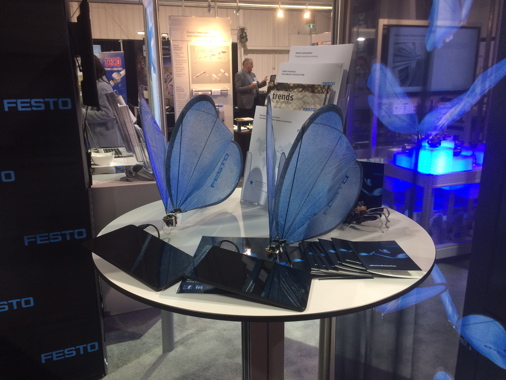 As for the butterflies? Every year, Festo debuts its latest advancement in bionics, with the 2017 version flying about the CMTS airspace as a pair of eMotion Butterflies.

Developed by Festo’s Bionic Learning Network, the butterflies fly about the CMTS thrice daily over the length of the show, closely mimicking actual butterflies.

The eMotion Butterflies can set their own flight-paths, even in changing environments—so long as the trade show’s air-conditioning system doesn’t blow too strongly.

But it’s not just about creating servo-driven insects or to create a visual distraction at a trade show. The butterflies, along with the other state-of-the-art technologies introduced by Festo will help it in creating smarter processes on production lines, helping make them self-adjusting, self-diagnosing and self-configuring a la Industry 4.0 concepts to ultimately improve production efficiency, reliability and product quality.

“Industry 4.0 is more than a buzzword, it’s here, it’s real products that will further enhance manufacturing productivity,” says Festo Canada president and chief executive officer Roger Hallet. “You aren’t likely to ever need eMotion Butterflies, but the technologies they utilize will find their way into new Festo products that will make your business more globally competitive. We know when you see the butterflies in action at CMTS, you’ll see a bit of the future of manufacturing.”

About Festo
Festo is a global leader in automation technology and the world market leader in industrial training and education. Festo’s pneumatic and electric drive technology stands for innovation in industrial and process automation – from individual products to ready-to-install solutions. Festo’s hallmarks include a global presence and improving customer productivity through close, long-term partnerships. With 18,800 employees worldwide in 61 national companies, Festo’s turnover for 2016 was €2.74 billion (~CDN $3.995 billion). Festo has more than 300,000 customers in 176 countries. Company information available at www.festo.ca.